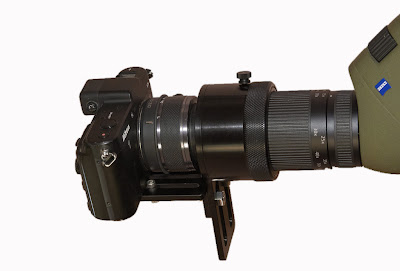 I was contacted a few weeks ago by Stephen Ingraham, field rep for Zeiss Sport Optics, about a new digiscoping adapter that Zeiss is starting to market for their DiaScope spotting scopes and Vario D 15-56X/20-75X Zoom Eyepiece.   He had asked me if I'd be willing to field test the new Digidapter™ digiscoping adapter, and I immediately said, "How soon?!"  I contacted Paul Sayegh, inventor of new adapter, and he sent me a unit to evaluate.

Things didn't quite start out on the best foot, though.  When Paul asked me what I was shooting with, he informed me that the new Digidapter™ would not work with my 'older' Vario D 15-45X/20-60X Zoom eyepiece - the eyepiece barrel diameter is smaller than the new 20-75X eyepiece, so the connector sleeve of the Digidapter™ would not fit it (too large).  He also informed me that the Nikon 1 V1 w/ 10-30 mm lens would not fit the Digidapter™, either, because the lens is too large for the adapter assembly.  Undaunted, Paul contacted Stephen, and he and Zeiss were gracious enough to send me a new 20-75X Zoom Eyepiece to evaluate the Digidapter™ with the Nikon 1 18.5 mm lens I had (and would fit).  Long story short, I received the new eyepiece, the Digidapter™, and was able to make it work like a champ using both the 18.5 mm lens AND the 10-30 mm lens of the Nikon 1 V1 camera system.  Initial results have me HOOKED on both the new eyepiece and Digidapter™! 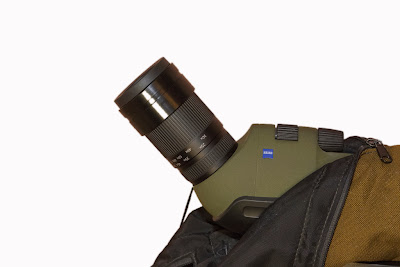 Paul has gone to great lengths to design and machine a beautiful, lightweight digiscoping adapter.  Instructions for assembling the Digidapter™ can be found here.  I unscrewed the eyecup assembly from the Zeiss 20-75X Zoom eyepiece and slid the inner sleeve of the Digidapter™onto the eyepiece.  The sleeve went on with a little bit of pressure, and fit snugly over the eyepiece barrel thanks to a nicely-designed inner O-ring inside the sleeve. I then screwed the eyecup assembly back on. 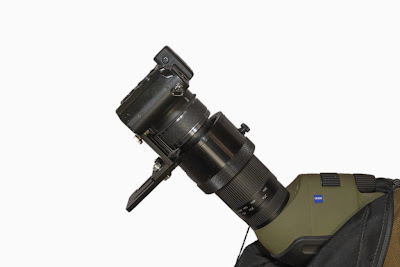 Assembling the two brackets that make up the Digidapter™ was easy, and once tightened, the assembly slid easily over the sleeve attached to the eyepiece.  Tolerances are very precise with this unit, so the camera assembly can be rotated smoothly about the sleeve.  Even without the small locking screw tightened the unit is stable enough for hands-free digiscoping.  I might glue a small tether to the locking screw so I don't lose it, as it has short threads.

A very nice feature of the Digidapter™ is the ability stabilize the camera position on the platform using two small thumbscrews.  Once properly aligned the camera can be quickly removed and reattached to the platform for perfect realignment. Here I've positioned the screws in front of the camera, but smaller camera users may prefer to position the screws behind the camera per instructions.  Either way, the rig is stable and ready for use.  Make sure to tighten the screws well, though, so they don't loosen in the field (especially during cold weather).

I printed an ISO 12233 Photography resolution chart on Epson Photo Paper and mounted it on a flat surface for testing the Digidapter™, the eyepiece, and the Nikon 1 V1 camera system.  Since I was told that the 10-30 mm lens on the V1 would not fit, I first concentrated on the Nikon 1 18.5 mm f/1.8 lens.
I found that the V1 and 18.5 mm lens mounted on the platform had to be butted up against the rubber eyecup in order to get a sharp vignette circle at the extreme edge of the viewfinder. I photographed the test chart from about 20' away using ISO 100, +0.7 Exposure Compensation, at f/1.8, and auto-timer (10 seconds) using Aperture-priority.

Initial results were a bit disconcerting.  At 18.5 mm the view through the camera and eyepiece showed a touch of a vignette circle along the outside edge of the viewfinder.  That in itself is no issue, so the Digidapter™ is doing its job, but it was the edge-softness and chromatic aberration (CA) in my images that were bothersome.  The high-contrast edges showed yellow and blue fringing that I caught right away.  The center-half of my FOV was razor sharp, but focus dropped off dramatically toward the edges.

I had this issue w/ the older 20-60X Zoom eyepiece, and originally thought it was the eyepiece, but now I wasn't so certain.  The view through the new eyepiece is beautiful, and the CA and edge-softness is barely imperceptible, so it MUST BE THE LENS! Just to be sure, I took a few photos of the chart using the 18.5 mm lens next to both the new and older eyepieces.  Two things stood out: 1) the 'older' 20-60X Zoom eyepiece showed NO CA while the 'new' 20-75X Zoom eyepiece showed some CA, and 2) the newer eyepiece appears to have improved edge sharpness.

So, if it is the lens, then how would adjusting aperture perform?  At f/8 both the older and newer eyepieces showed much improved sharpness across the FOV, so if this lens is to be usable it'll need to be stopped down for optimum digiscoping efficiency (at the cost of an f-stop or two of shutter speed).

The next question begs, how does the lens perform throughout the eyepiece magnification range?  As I soon discovered, the amount of vignetting that one experiences while zooming the eyepiece from 20X (none-to-slight) to 30X (minimal) to 40X (worst) to 50X (minimal-slight) to 60X (slight) to 75X (none) DEPENDS ON OPTIMAL LENS/EYEPIECE PLACEMENT.  With this setup I have the 18.5 mm lens butted up against the rubber eyecup of the zoom eyepiece on the Digidapter™.  With the rubber eyecup screwed back on over the inner sleeve of the Digidapter™the eyecup does not completely tighten to a closed position, thus it sticks out from the eyepiece lens a fraction of a millimeter or so.  This results in more vignetting than if the lens/eyepiece were perfectly aligned.  So this is what I saw through the camera when digiscoping the test pattern:

Note that the images were taken at f/1.8.  Had I set the aperture to f/8 the results would have been sharper images but vignetting would be slightly more severe.  That said, I was extremely impressed with the sharpness of the eyepiece at 75X! 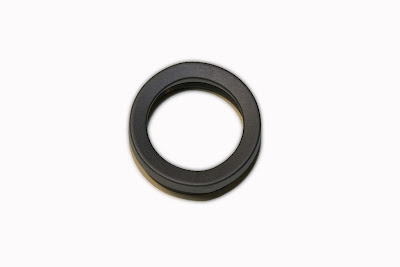 I called Paul to report my initial (mixed) findings.  With the eyecup butting against the collar of the inner sleeve of the Digidapter™ the proper lens/eyepiece distance wasn't quite being achieved.  For most P&S camera users this may not be a problem, but for the 1 Nikon 18.5 mm f/1.8 lens (and subsequently the 10-30 mm f/4.5-6 lens) it was affecting image quality in more than one way.  So he suggested I remove the rubber cup from the sleeve!  Sorry, Zeiss... 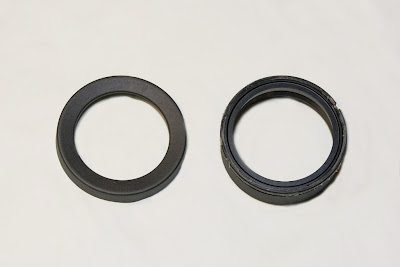 I peeled the eyecup from the screw-on ring, which is held together by contact cement.  Screwing the ring back onto the eyepiece now allowed the ring to be screwed tightly against the inner sleeve and produce a nice dust/moisture barrier. 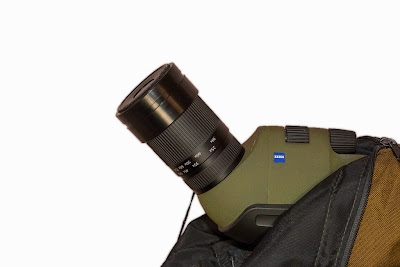 The result was that extra minutia needed to create a vignette-free view at 20X on the eyepiece!  An added bonus was improved edge sharpness of the 18.5 mm lens even at f/1.8.  I tested the setup w/ a Halloween scene (courtesy of our neighbors across the street).  Since it was raining I digiscoped the porch across the street (~300 ft away). As I mentioned, vignetting was slight at 30X, noticeable at 40X, and disappearing by 60X. 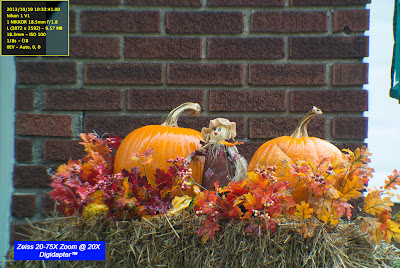 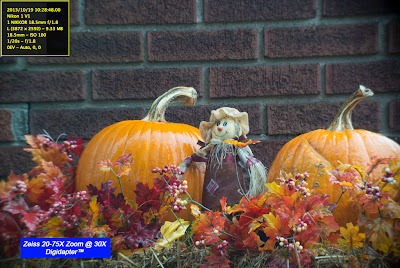 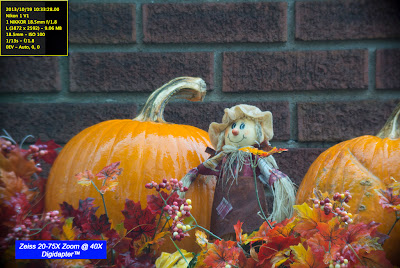 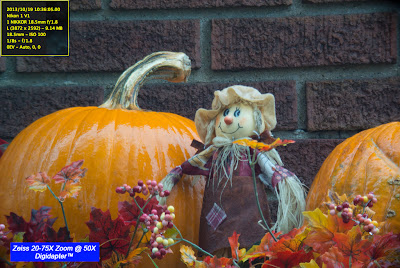 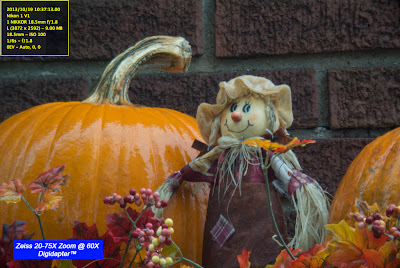 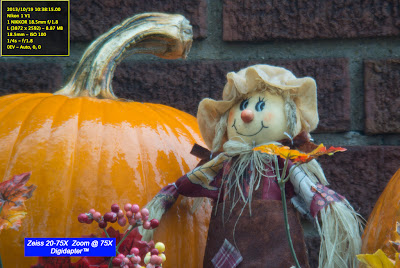 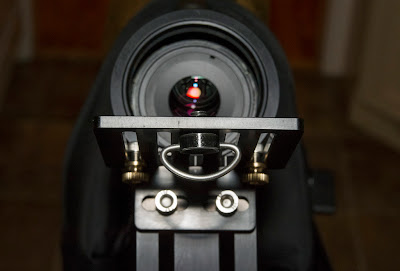 One last modification involved the tripod screw, which can be removed with a coin.  I prefer the tripod screw w/ the metal loop that folds up when not in use, so I swapped out the two.  I find this detail important, because the camera has to be removed from the platform each time a battery or memory card is installed or removed, and I don't need to be fumbling for a coin to remove the camera.

With the eyecup removed it is now possible to mount the V1 with the 10-30mm lens on the platform and extend the lens throughout the entire focal length.  The lens rests agains the eyepiece, but there's no concern w/ glass-on-glass.  At 10mm there is significant vignetting, and it isn't eliminated until the lens is zoomed past 18mm.  But I've found that the 10-30mm lens is actually sharper than the 18.5mm lens at all focal lengths, so I am thrilled that I'm able to get it to work with the Digidapter™and 20-75X Zoom eyepiece! 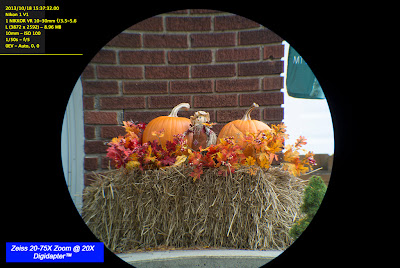 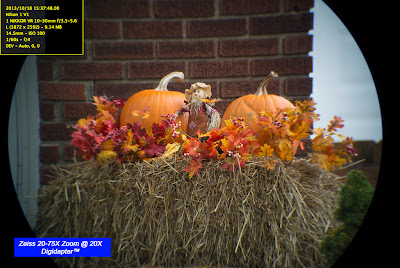 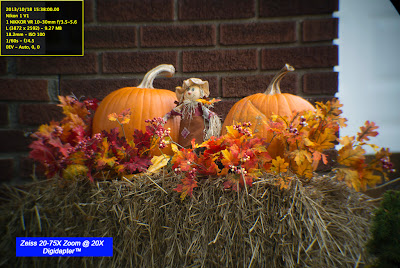 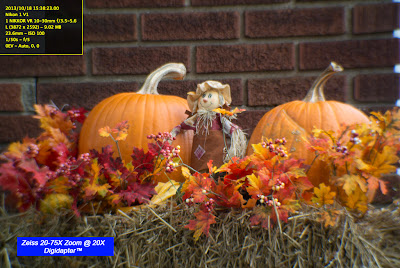 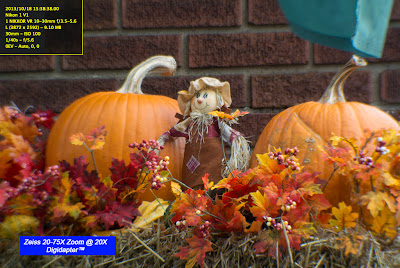 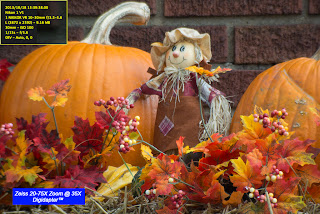 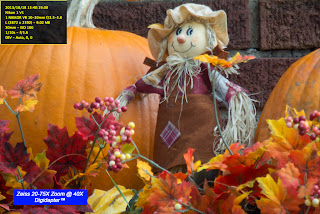 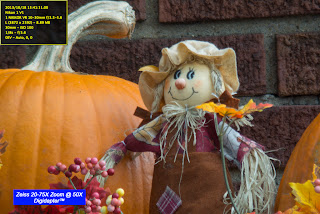 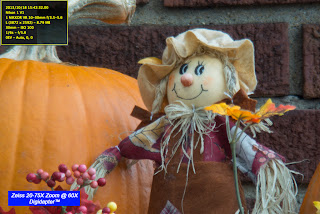 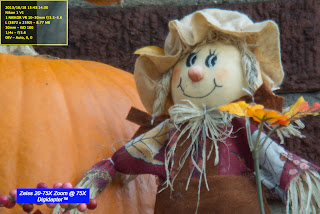 At full magnification the quality of the zoom eyepiece stands out!  And, for the first time in many years I actually have the ability to digiscope throughout the entire range of a zoom eyepiece and a zoom lens on the camera.  So you can understand why I'm hooked on the new Zeiss Vario D 15-56X/20-75X Zoom Eyepiece and the new Digidapter™ digiscoping adapter.

Thanks to Stephen Ingraham, Zeiss Sport Optics, and Paul Sayegh for a top-of-the-line digiscoping rig that should be fast, functional, and versatile in the field.  Now to go chase some birds!
Posted by Jerry at 9:17 PM

I hope can try this adapter soon... 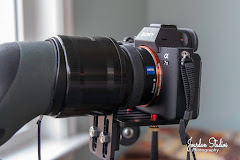 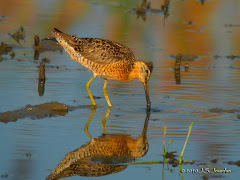 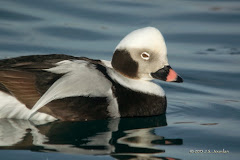 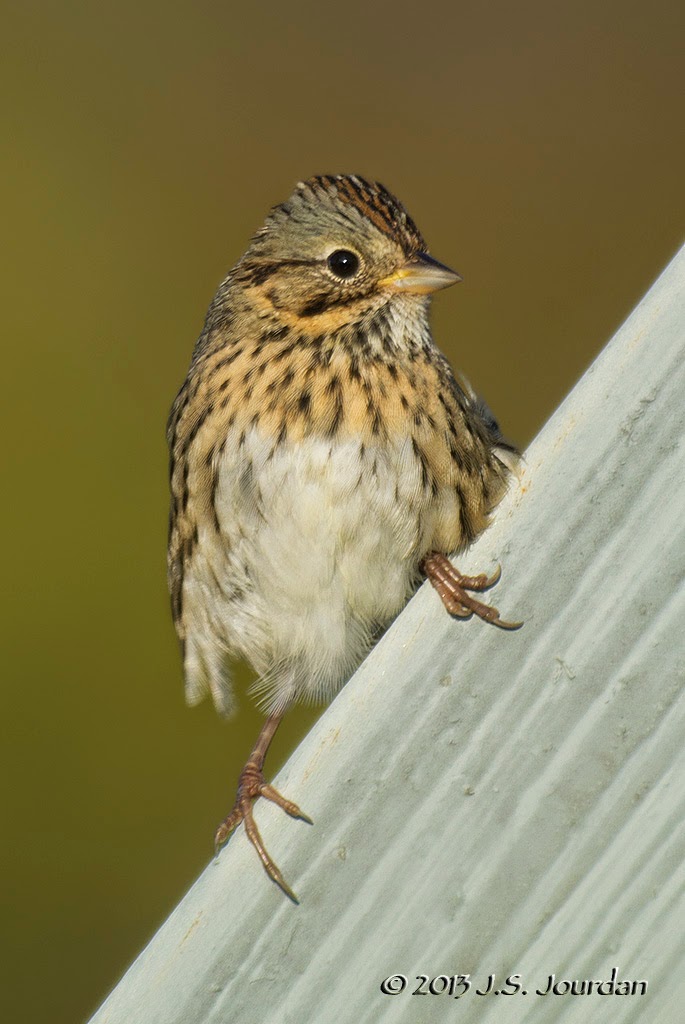 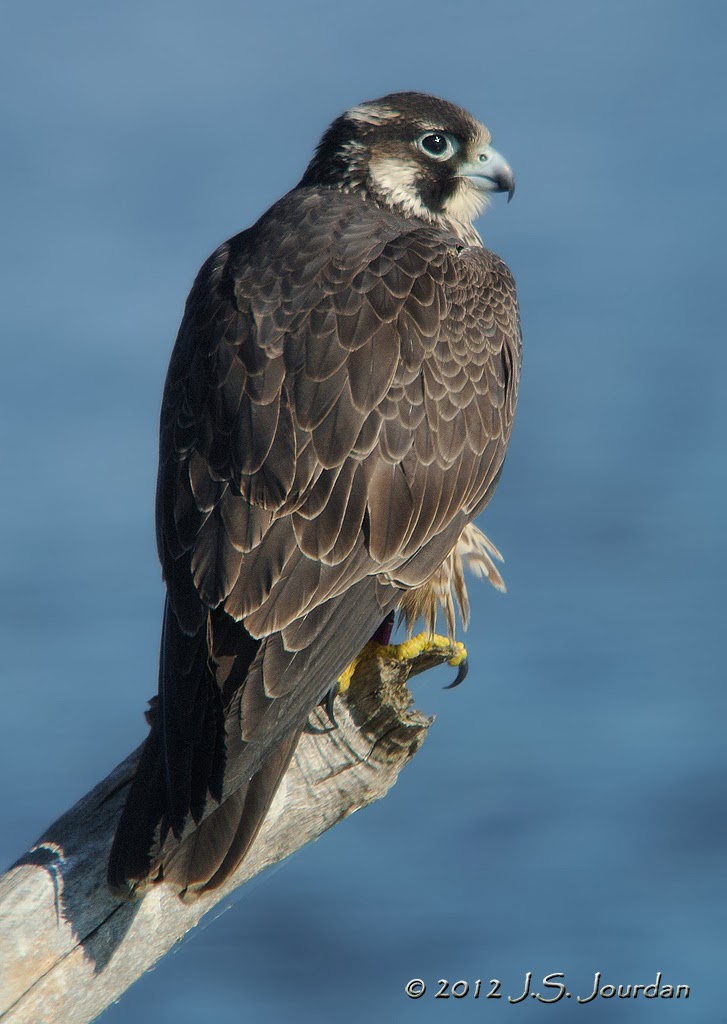 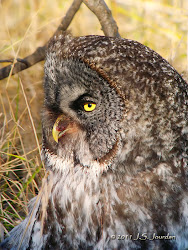